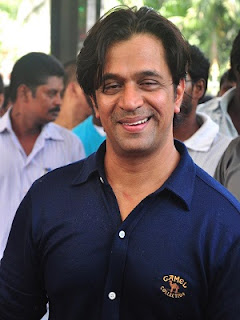 It is a known fact that Action King Arjun is a bighearted person towards other stars in difficulties. But long back he was tangled in a rumor of carrying a old telugu heroine to hospital when she attempted suicide. Lately, Arjun clarified on that speculation.

Long back, Telugu Heroine Gajala made an attempt to suicide by taking sleeping pills in the middle of the night for some unknown reasons while in the shoot of a film in hyderabad. Her cousin immediately called Hero Arjun as she was acting in his film only. Shocked by the news, Arjun looked for co-workers but couldn't find anybody at that time as it was midnight so he himself took her in his car and lifted her all the way to ICU. Actor said that the media manipulated the whole version and came up with their own version. But in reality there is nothing between him and Gajala, except saving her life on that day.

Finally he says, "I'm happy today that Gajala's life was saved and she too respects me a lot for the whole thing. Rest of things, I don't take them to heart".
Posted by cinevedika news
Share to: